On Wednesday, January 27, SNF DIALOGUES, a series of events held through journalism nonprofit iMEdD (the incubator for Media Education and Development), hosted its first live webcast of the new year, on the fundamental question of what COVID-19 has taught us—and how this challenge will shape the future of society, science, and their relationship.

Spyros Artavanis-Tsakonas commented, “What has the pandemic taught us? That research is not a luxury but a necessity. Also, it is preparing us for the next pandemic. We were completely unprepared for such a major onslaught on the health system.” Regarding the vaccinations that have already started in the so-called developed world, Artavanis-Tsakonas said that “on a personal level, the data that I have seen is enough to convince me to get the vaccine as soon as possible, because the risk of dying from the coronavirus is much higher than the risk of dying from the vaccine.”

Stavroula Tsinorema pointed out that the pandemic has raised a number of very important ethical issues and pointed specifically to the ethics of public communication. “Public communication must obey ethical rules. First of all, when information is transmitted by an expert, it must be credible and, secondly, the messages we send to society must be unambiguous.” On the distribution of vaccines, Tsinorema stressed that “we must avoid vaccination nationalism. Some countries, which have the means, have already ordered a much larger number of vaccines than they need based on their populations. As a result, the process of vaccine production and distribution is delayed in other countries. It is extremely unfair that Africa, where the coronavirus is currently raging, will not get the vaccines until the end of February. There must be international deliberation and the proper care to distribute vaccines where they are most needed.”

“Every person has a different level of emotional maturity. It is a matter of what type of self-control we can exercise. Those who cannot stand a state of constant change, movement, and physical contact need a way of rationalizing their discomfort. Conspiracy theories offer this solution. They deny facts, reality, and scientific information and justify their antisocial behavior by pointing to all these paranoid scenarios,” said Anthony Hatzimoysis. Looking to the future, Hatzimoysis asserted that “we must all change our attitude. Hope is not enough. It is courage we lack. We ourselves need to become active.”

The discussion also featured a prerecorded interview with critically acclaimed science fiction author Ted Chiang, who pointed out the similarities of the pandemic to its literary and cinematic depictions, but also what this might mean for virus deniers. He noted that “the pandemic we are experiencing is not like the ones that movies and films had predicted for us. Perhaps that is due to the fact that many people are a little skeptical about the severity of the pandemic.” Chiang will take part in the SNF Nostos Conference on Humanity and Artificial Intelligence that will be held on June 24 and 25, 2021.

The next SNF DIALOGUES webcast will take place on Wednesday, February 17 as part of the three-day virtual iMEdD Journalism Forum, “Reflect-Reform-Restart.” Following the Avant-Première of iMEdD’s inaugural documentary production, Present (Parontes) by Yorgos Avgeropoulos, the SNF DIALOGUES event will open a direct discussion between journalists and the public on the reality and challenges of journalism and on trusting news information in the midst of a public emergency. The DIALOGUES webcast will feature Avgeropoulos as the main speaker, accompanied by the journalists, photojournalists, and filmmakers who collaborated on the documentary, as well as a live discussion with the audience.

snfdialogues.org
SNF DIALOGUES welcomed 2021 by looking ahead to the post-pandemic landscape for science and society. 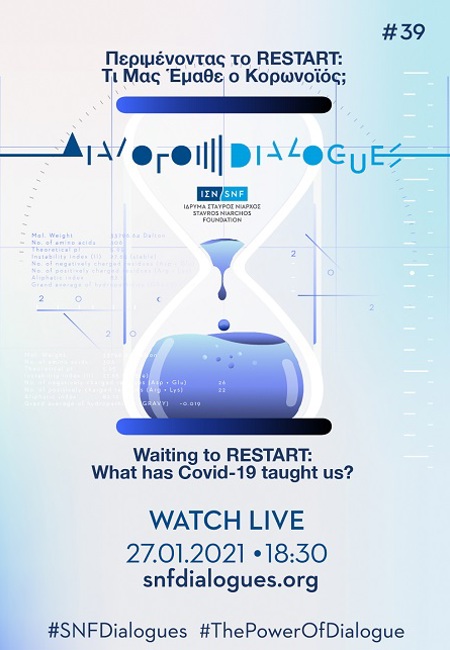 Professor of Philosophy and Bioethics