Echoes from theater traditions in ancient Athens that continue to reverberate across the millennia in current global politics were the focus of the 54th SNF Dialogues discussion, which took place on Wednesday, September 28, on the roof of the National Museum of Contemporary Art in Athens. The audience and the speakers identified themes in ancient plays, as well as ways in which ancient theater was inextricably intertwined with civic participation, that still resonate in today’s environment of omnipresent polarization. Through an open discussion enlivened by questions from the audience, which included students, the Dialogues explored how ancient drama can shed light on contemporary public life, focusing on the lasting relevance of dramatic works over time and on political and social change.

“It’s wrong to take democracy for granted. Democracy is something that already disappeared once in world history, between the 4th and the 18th centuries, and could very easily disappear again. As a contemporary of ours, Canadian-American filmmaker Stella Taylor, says: ‘Democracy does not exist, but when it’s gone we will miss it.’ So, it is something that may be crumbling; we may question it, but in a way it’s still here and we can—maybe, I don’t know if we can—defend it,” said Mountraki. Turning to ancient comedy, she observed that “comedy was a predominantly political type of theater, meaning that it was a way to control what politicians did in Athens. That is why it was also very biting and poets could exercise the right to speak candidly and satirize individuals—so that they could criticize what was happening from the stage. And hence the awkwardness now, when we attempt to do comedy 25 centuries later, in a reality filled with political events and persons of interest dominating the news cycle. But it does demonstrate this ability of art to sway political life from the stage.”

Reflecting on the value of Dialogue, Puchner mentioned that “in the citizen assemblies of ancient Greek city-states, for instance, one orator would give his opinion, then another, and so on, and then the vote would take place. When we talk about dialogue today, we mean something else: to sit together, to understand each other—but that also happens on Facebook. But the body is missing, and dialogue is not just words. It’s the whole body, it’s how I say something, the things that I cannot write down. The expression on my face, my eyes…. Perhaps I’m saying one thing, but you can see me winking and know that I mean something else. Entire worlds of expressiveness are lost in this way.” Turning to ancient tragedy, he said, “Ancient tragedy had a mechanism that starts with hubris, which involves a human being, a mortal, transgressing the laws of the gods and being punished for it. And, today, we are in a parallel situation, in the sense that we are breaking the laws of nature, the absolute standard. And you cannot negotiate with nature. You can’t say to it: ‘I did this or that.’ It is what it is. And we are part of nature too. So, we are violating our own being and it is our brains that do this. But have you thought about the series of random coincidences that created this planet, where life was able to be created, along with a brain that is able to think about all of that?”

The discussion, entitled Modern political values, ancient drama, serves as the starting point for a series of further SNF Dialogues discussions on the political values and institutions, which, although often compromised or challenged, serve as ideals and as touchstones for democracy and society globally. More information will be available soon on the Dialogues website.

We were very pleased to hold the Dialogues event on the beautiful rooftop of the National Museum of Contemporary Art—following, of course, all the standard rules and guidelines for a third party renting space at the museum—with which the Stavros Niarchos Foundation (SNF) has a special connection. The museum was completed through a €3 million from SNF in July 2018.

Roof of the National Museum of Contemporary Art (EMST)
SNF Dialogues hosted a discussion on the timeless links between politics and ancient drama, as well as the pertinent messages it offers still today. 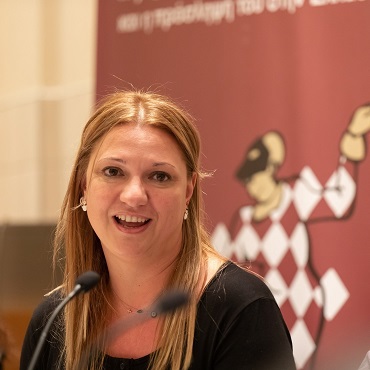 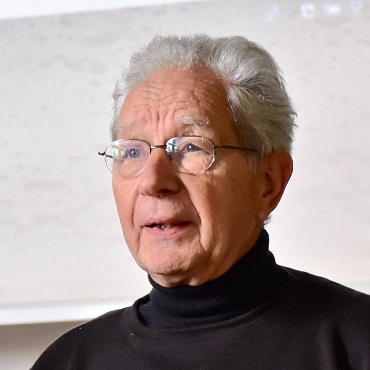 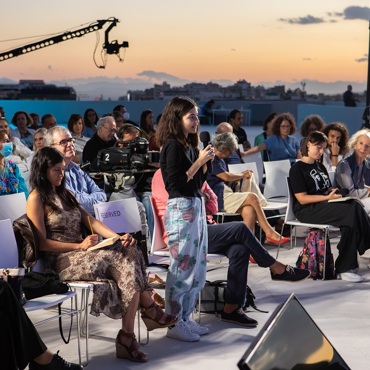 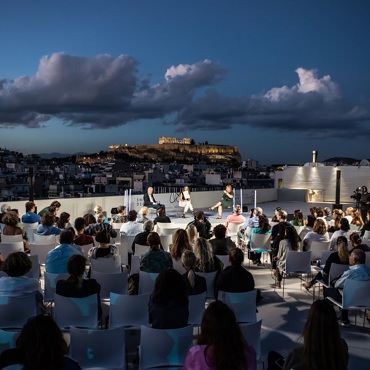