On Friday, July 13th, 2018, the Stavros Niarchos Foundation (SNF) held the ninth event of the series DIALOGUES under the title “Football will save the world.” For the first time ever, DIALOGUES were held outdoors, within the Great Lawn area of the Stavros Niarchos Park and with a focus on the king of Sports, football.

Just before the closing curtain of the 21st World Cup, professional football players and veterans, along with coaches, sports reporters and experts talked about the unseen side of football as a social and cultural phenomenon with a variety of different meanings, focusing on the various aspects of the beloved sport, which excites fans on a massive scale all over the world. Of course, no football discussion could ever be complete without the “star” of sports news, the World Cup, the goals and the best moments that marked the history of Greek and world football, as well as a special mention to current football culture in Greece.
The event was held as part of the collaboration between the Stavros Niarchos Foundation and the Barça Foundation for the implementation of the FutbolNet program, which aims to help refugee children and teenagers by encouraging social inclusion and integration in local hosting communities, through education on values and sports.

FutbolNet is an accredited program that has demonstrated positive social impact and changes in multiple countries, under different circumstances. More than 3,000 children and teenagers are the beneficiaries of the program being implemented in Greece, Italy and Lebanon, with the SNF’s support. Before the start of the event, the SNF and the Barça Foundation jointly organized another sports program at the SNFCC’s Great Lawn, with the participation of refugee children from the hosting centers in Skaramagas.

During the discussion, the Co-President of the SNF, Mr. Andreas Dracopoulos, talked about the role of sports in society, which is more relevant than ever: “Football is like life, full of moments, interesting characters and emotions. It is also a microcosm, symbolizing our entire society, who lives and moves according to a set of rules, like in a football game. In our times, sports, and especially football, can be a source of inspiration and empowerment, giving us hope that the human element and the values of cooperation, effort and dialogue that we share, are more powerful than the things that divide us.”

The discussion panel included World Cup Champion with the Brazilian National Team in 2002 and European Champion with FC Barcelona in 2006, Edmilson, who talked about football as a means for social change that contributes to unity and social cohesion, as it invites everyone to participate, regardless of ethnicity, religion or beliefs. The FC Barcelona legend also spoke about his work with the Edmilson Foundation, remarking, among other things, that “quite often, we don’t understand what children go through in a country like Brazil. I could have stayed there, as many of my friends did. Football gave me the opportunity to return to my city and do things for those in need. I am a better person through football.”

The first Vice-President of FC Barcelona, Jordi Cardoner, talked about sports as a unifying force for different societies and cultures and as a vehicle for the promotion of values. He referred to FC Barcelona’s support in the implementation of FutbolNet programs and in improving the everyday lives of these children, highlighting their enthusiasm and joy when they are on the football pitch with the team’s players. “Football combats social exclusion, racism. I remember when I was young, football was a sport. Today, football is culture, a system of values. Through football, we try to promote values,” stated Mr. Cardoner during the discussion.

Veteran football player Antonis Antoniadis, the referee Chrysa Kourobilia and sports journalist Antonis Karpetopoulos represented Greek football in the discussion, drawing from their own personal experience and action in the field.

Specifically, as Mr. Antoniadis pointed out, “football is the most widespread and most complex social phenomenon on the planet. At the same time, it is also the most democratic sport. In football, there is room for everyone,” while Mr. Karpetopoulos stressed that the uniqueness of football is due to the fact that “it is a sport that assimilates talent and creates ‘stars’ regardless of where they come from and how they grew up.”

The historian Alexander Kitroeff referred to the sociopolitical aspect of football, mentioning that “there are always attempts to appropriate the game, for multiple purposes, but football always represents the people rather than any political regime or ideology.”

Discussing the role of the referee, Mrs. Kourobilia mentioned that “refereeing is a thankless task. However, there can’t be a football match without the referee. No referee wants to be the protagonist in a match. Our goal is to make the players the stars, to always go unnoticed.”

Concluding the discussion, Mr. Antoniadis addressed parents and sent a message to the young generation, stressing that, in football academies, what matters is that children learn about cooperation, consistency and responsibility; elements that will shape their character later on. 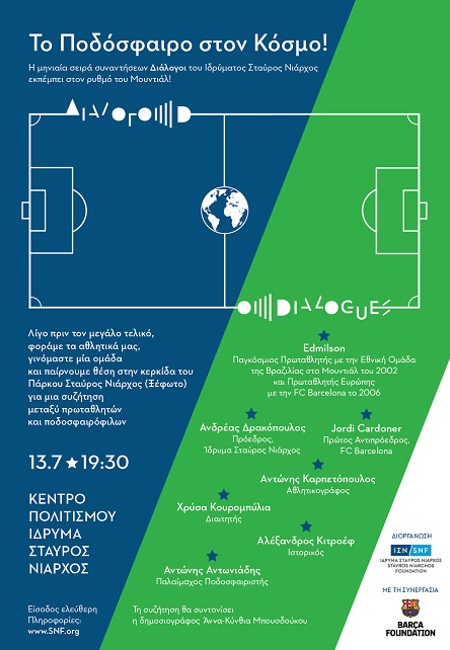